Lelouch successfully escapes with Empress Tianzi and the Black Knights attempt to unite with their Indian allies. Desperate to recover the Empress, the Eunuchs agree to forgive Li Xingke if he rescues her. To that end, he is granted use of the powerful Shenhu. Kallen intercepts him with the Guren Flight-Enabled Version, but its power runs out and she is taken hostage. Lelouch swears to rescue her, despite Diethard Reid’s suggestion to retreat. Xingke demonstrates his skill as a strategist, forcing the Black Knights to retreat to a mountainside monument constructed as the tomb for the former Tianzi, hoping the Federation would be hesitant to attack. The Eunuchs turn on Xingke and his troops, having enlisted the aid of the Britannian forces. Meanwhile, another Lelouch is present at the Ashford Academy. 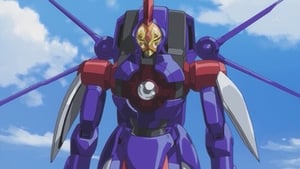