Lelouch is shocked that Sayoko has made him into a playboy. As he tries to work out a way to undo the damage, Milly declares Cupid Day, where any girl can become a boy’s girlfriend by stealing his hat. Rolo and Sayoko help Lelouch avoid the female students trying to catch him. Alone, Lelouch and Shirley discuss recent events and trade hats. Elsewhere, Knight of One Bismark Waldstein informs the Emperor of a meeting between the princes and princesses about waging war against the Chinese Federation, where Schneizel decides threats and negotiation will work better than open war. Cornelia, determined to reveal the existence of Geass in order to clear Euphemia’s name, confronts General Bartley, who begs her to help them, saying the Emperor’s recent actions may destroy the world. While Suzaku and Lloyd discuss on the Guren, Nunnally visits Kallen in prison. Jeremiah arrives in Area 11 and uses his newly-acquired Geass Canceller on Shirley, restoring her memories of Zero’s identity. 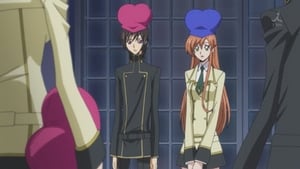