Assassin from the Past

Having recovered her memories, Shirley questions her perception of reality. Lelouch heads to the train station to check on the delivery of a G Train, a network of Gefjun Disturber-equipped trains that will black out all of Tokyo once active. Meanwhile, Jeremiah makes his move on Ashford Academy, overwhelming Sayoko and Rolo in his search for Lelouch. Villetta willingly reveals Lelouch’s location and Jeremiah corners him, but is paralyzed by the G Train. Struggling, Jeremiah asks why Lelouch betrayed the Emperor, to which the former prince reveals his motivation to avenge his mother. Having greatly admired Marianne, Jeremiah joins Lelouch’s cause. Shirley finally reconciles her restored memories, asking Suzaku to forgive Lelouch as she has. Before she can reach Lelouch, she runs into Rolo, who uses his Geass once she reveals knowledge of Nunnally. As Lelouch leaves, he discovers Shirley mortally wounded, who confesses her feelings for him as he desperately commands her to live. 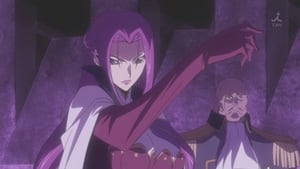