Suzaku realizes he cannot stoop to Lelouch’s level to achieve his goals and decides not to use Refrain on Kallen. Instead, he heads to Ashford, where he discovers the Intelligence Agency is under Lelouch’s control. Ohgi and Villetta meet in the woods, where Villetta intends to kill him, but Ohgi confesses that he has fallen in love with her. Sayoko interrupts and attempts to dispatch Villetta, and Ohgi is injured in the struggle. He tumbles off a cliff and Villetta jumps after him. Nina and the In Vogue staff make their first successful nuclear bomb test. Lelouch confronts the Emperor atop the Sword of Akasha. He learns the Emperor has taken V.V.’s “Code,” which has made him immortal. C.C. appears and reveals to Lelouch her wish is to die, then transports him to “C’s World” to ensure his safety, where he witnesses her past. Upon realizing her true wish, Lelouch returns to reality, proclaiming he shall be the only one to grant her wish. He attacks the Sword of Akasha with the Shinkirō and rescues C.C., only to find she has lost all her memories except those before receiving the power of Geass. 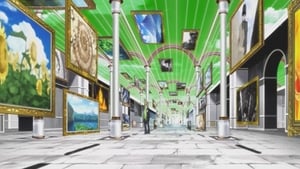