Forty-seven countries rally under the banner of the new United Federation of Nations, and their first declaration is to declare war on Britannia to liberate Japan. In anticipation, the Knights of Rounds and the bulk of Britannia’s military force are transferred to Japan. Nina also asks to have the Lancelot equipped with her newly-developed F.L.E.I.J.A. (Field Limitary Effective Implosion Armament) bomb. The Emperor interrupts the Federation’s announcement to challenge Zero to a battle for the world itself, since they are the only remaining powers in the world. Fearing for Nunnally’s safety, Lelouch calls Suzaku and admits he’s Zero, then begs Suzaku to rescue her. Suzaku agrees, but only on the condition that Lelouch meet him alone at the Kururugi Shrine. 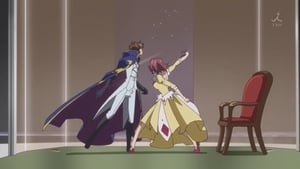