As the Emperor prepares to begin Ragnarok, Lelouch and Suzaku head to Kaminejima to face him. No longer restrained by his notions of wrong methods being meaningless, Suzaku strikes a deal with Schneizel to become the Knight of One, in exchange for assassinating the Emperor. Lelouch, using his Geass to its full potential, compels much of the Britannian military on the island to follow his commands. Meanwhile, the leaders of the Black Knights decide to declare Zero dead, as the truth will be far more difficult to swallow, but their story is doubted by others. Anya’s mind is taken over by Marianne, who restores C.C.’s memories. The two begin to put their own plans into motion. At Kaminejima, Suzaku is held at bay by Bismarck, while Lelouch marches into the Sword of Akasha, through the Thought Elevator, unopposed. Knowing he cannot kill his father, Lelouch destroys the entrance, planning to seal them both inside for eternity. 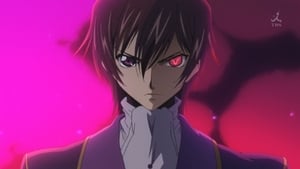