Within the Sword of Akasha, Lelouch learns the truth about his mother’s death from the Emperor and Marianne herself. The two reveal their intention to create a gentle world without lies, and begin Ragnarok. Lelouch almost reconciles with them, but changes his mind when he realizes that the world the Emperor desires has no future. Evolving his Geass to its next level, Lelouch defeats the Emperor with the help of the collective unconscious mind of every human, the personification of the “gods” the Emperor sought to defeat, dissolving both him and Marianne into dust. With Ragnarok ended, Lelouch takes up the throne as the new Emperor, using his Geass to make all the dissenters in the court acknowledge him as such. Suzaku is appointed as his new “Knight of Zero,” while C.C. looks on from the shadows. 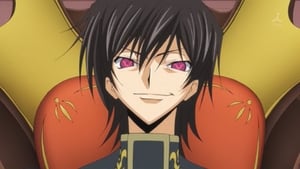