Lelouch returns to the Ashford Academy during the broadcast, causing Villeta Nu’s Special Division to have doubts he was the Zero on television. Needing information on his sister’s whereabouts, Lelouch sets a trap to turn Rolo into his pawn. Gilbert G.P. Guilford, Cornelia li Britannia’s knight and acting Viceroy of Area 11, presents an ultimatum to Zero: reveal himself or let the incarcerated Black Knights face execution. Elsewhere, Suzaku leads the Britannian frontlines in the Lancelot in the war against the Euro Universe. Lelouch confronts Rolo, but Rolo’s unique abilities allow him to gain the upper hand. 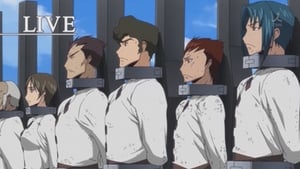