Nunnally is sworn in as the new Viceroy of Area 11, and reveals her intention to restore the Specially Administrated Zone of Japan. Knowing he cannot go against his sister’s wishes, Lelouch slips into a state of depression. Before he relinquishes himself to Refrain, Kallen steps in, reminding him his duty as Zero to realize the dream he gave to the Japanese. An evesdropping Rolo emerges, attempting to persuade Lelouch to abandon his identity as Zero and return to being a high school student. Meanwhile, the Black Knights are under attack by a Britannian naval fleet, led by Suzaku. A glimmer of hope is revealed to Lelouch after he sees fireworks setting off at Ashford Academy. Rushing to the battlefield, he successfully leads the Black Knights to defeat the entire naval fleet and surprise Suzaku by appearing as Zero, announcing his intention to accept Nunnally’s offer to join the Specially Administrated Zone of Japan. 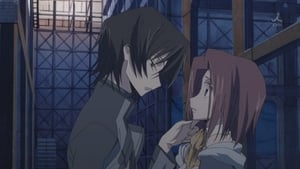