The Black Knights question Lelouch’s decision, and the Britannian Army remains wary of his intentions. In a private conversation with Suzaku, Gino Weinberg, Anya Alstreim, Lloyd Apslund, Cécile Croomy, and Miss Romeyer, Zero requests he be exiled from Area 11 in exchange for delivering one million participants. The Britannians think he is abandoning them to ensure his own safety, and accept. At the opening ceremony, Zero asks Suzaku what it means to be Japanese, to which the Knight of Seven replies it is a shared heart. When every participating Eleven dresses as Zero on cue, Suzaku has no choice but to exile all one million “Zeroes”, unwilling to start another massacre in the face of their peaceful resistance. 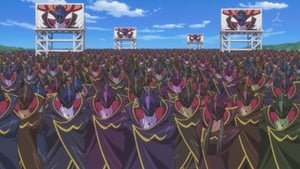