A Bride in the Vermillion Forbidden City

Lelouch learns that the Chinese Empress Tianzi is being forced into a political marriage to First Prince Odysseus u Britannia. The wedding is orchestrated by the High Eunuchs, who will become nobility in Britannia in exchange for turning over half their land to Second Prince Schneizel el Britannia. As the wedding begins, Li Xingke initiates a coup-d’état to overthrow the Eunuchs, but before he can free the Empress, Lelouch appears and takes her hostage. Elsewhere, V.V. prepares to unleash Jeremiah Gottwald against Lelouch and C.C. 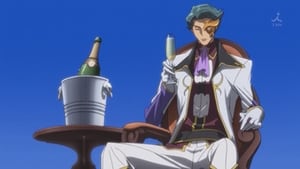