After being granted access to all previously locked rooms, Makoto and Kyoko investigate the dorm’s second floor and find a hidden room in the headmaster’s lodge. There, they discover the remains of Kyoko’s father, who had died long before the killing game started, along with an SD Card containing video interviews of all the students agreeing to spend their lives in Hope’s Peak Academy, although Monokuma pulls the plug before the video gets too far. Whilst Kyoko deals with the revelation that her father cared more about her than she thought, Makoto uses the headmaster’s e-handbook to open some lockers, finding some textbooks allegedly belonging to Yasuhiro and a notebook containing Kyoko’s handwriting, hinting at there being two ‘Despair’ students. Afterwards, Makoto visits the science lab, being used as a morgue, noticing some curious wounds on Mukuro’s body before Monokuma gives him a photo featuring all sixteen students except for himself. As the class trial soon begins, with Monokuma joining the fray, the other students reveal they had also received similar photos, only with them missing from their respective photos. Wondering where these photos came from, Makoto reveals the books he found, deducing they are each missing some of their memories, revealed to have been stolen by Monokuma. Makoto then accuses Monokuma of murdering Mukuro, deducing that Mukuro was murdered twice, pointing out the true cause of death were wounds eerily matching the ones Junko received. After Kyoko proves her innocence by revealing the shameful burns on her hands, Makoto deduces from Monokuma’s obscured evidence the identity of the culprit, Monokuma’s controller, and the academy’s mastermind to be none other than the real Junko Enoshima, who soon appears and reveals herself to be the true Super High School Level Despair. 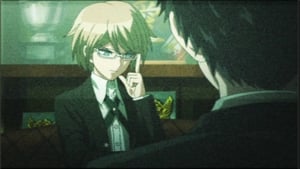