Not Normal Arc: Kill and Live

As the trial begins, swimmer Aoi Asahina testifies that she and martial artist Sakura Oogami witnessed Sayaka enter the kitchen, during which one of the kitchen knives, which was used as the murder weapon, was stolen. Meanwhile, Kyouko proves Makoto’s innocence by pointing out that, since his shower room didn’t have a lock, he wouldn’t have needed to take apart the doorknob to enter it. After wondering how the culprit entered the room in the first place, Kyouko presents evidence which reveals Sayaka had purposely invited someone into the room, meaning that Sayaka had actually intended to murder someone and pin the crime on Makoto, only for her target to fight back and kill her instead. Remembering the message written in blood, Makoto deduces that “11037” is actually an upside down spelling of “LEON” and accuses baseball star Leon Kuwata of the crime. 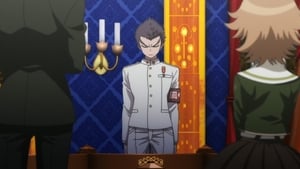