Following the class trial, Monokuma grants access to the second floor of the academy, containing a library and a swimming pool with gender-divided changing rooms. Whilst searching the library, the group find a broken laptop and a letter that indicates Hope’s Peak Academy has actually been shut down for years, along with a storeroom filled with confidential files. As the pool changing rooms require ElectroIDs to unlock, Monokuma introduces a school rule that students are forbidden from exchanging their ElectroIDs. Later, Makoto comes across writer Touko Fukawa, who appears to have a thing for the cold-hearted affluent progeny, Byakuya Togami, before winding up as a witness to a sauna endurance battle between gangster Mondo Oowada and moral compass Kiyotaka Ishimaru, who end up bonding with each other. 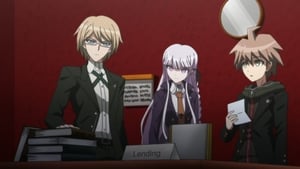