As the trial gets underway, Byakuya states that Touko is the culprit as she has dissociative identity disorder, her other personality being none other than Genocider Sho. Surely enough, as Touko faints, her personality switches to that of Genocider who, despite casually admitting she is a genuine homicidal maniac, denies killing Chihiro as she always uses scissors in all of her serial killings. Being the only other one who knew of Genocider’s crimes, Byakuya is suspected of the crime, curiously not denying it. However, after Makoto deduces Chihiro was actually killed in the boy’s changing room, with Kyouko subsequently revealing Chihiro was, in fact, a cross-dressing boy, Byakuya admits he is not the killer and had only modified the crime scene to make the game more interesting. 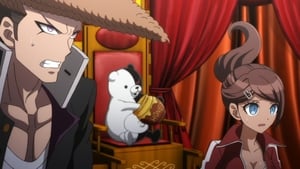