After the others investigate the newly opened third floor, containing a rec room, art room and a physics lab, Monokuma announces his next incentive; a cash reward of 100 billion yen to whoever graduates, though noone seems to fall for it. Afterwards, the gang investigate the bath locker rooms after Aoi mentions seeing Chihiro’s ghost the previous night, which turns out to be a laptop left behind by Chihiro before his death, containing an A.I. program called Alter Ego, who offers to help decrypt some files left on the laptop. As Kiyotaka, who has been mortified since Mondo’s execution, asks Alter Ego if he blames him for Chihiro’s death, he imitates Mondo to give him words of encouragement, which seems to encourage him a bit too much. Alter Ego then shows a curious photo of Leon, Chihiro and Mondo hanging together, which could not have possibly been taking during the time they’ve known each other. 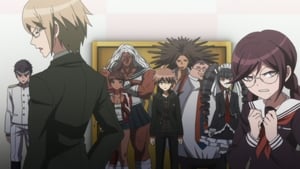