Hifumi’s dying words leave most of students convinced that the culprit is fortune teller Yasuhiro Hagakure, who is found by Kyouko near the pool stuck inside the aforementioned ‘Justice Robo’ costume. Yasuhiro, however, denies committing any murders, claiming he was knocked out after being called by a note, which had subsequently gone missing. After Makoto and Kyouko finish their investigation of the crime scene, the class trial begins, where Makoto starts vouching for Yasuhiro’s innocence, using evidence to point out he couldn’t have designed the outfit, let alone carry the corpses whilst wearing it. After Kyouko asks the court to consider the two murders as seperate incidents, Makoto deduces that Hifumi had only faked his death from before, with Kyouko’s evidence revealing Hifumi was the one who killed Kiyotaka, moving his body to the art supply closet where he was killed himself. 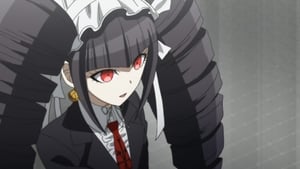