Taking the unconscious elf with them, the 3rd Unit return to the village of Coda, and upon learning about the Fire Dragon, the villagers decide to evacuate as well, assisted by the Japanese soldiers where they are later join by two mages Lelei and her master. Taking heed of the situation, a group of bandits decide to attack the villagers, just to be vanquished by Rory Mercury, an apostle of the Dark God Emroy. While escorting the refugees, Itami’s party rendezvous with Rory, and taking a special interest on Itami, she decides to accompany them as well. However, the Fire Dragon appears to attack the convoy and the 3rd Unit manages to drive it away, after blowing off one of its front legs with Rory’s help. After giving a funeral for the casualties of the battle, the 3rd Unit part ways with the villagers, and Itami decides to take the rest of the refugees as well as Rory, the elf woman and Lelei back to Alnus Hill. 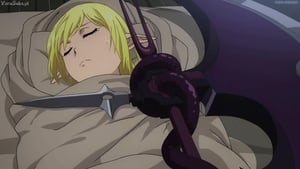