Mob gets trapped inside a parallel world created by Mogami Keiji. Minori ends up transferring to his class, and Mob becomes the target of bullying. He can’t ask anyone for help, and his negative emotions start to build inside. The truth behind the tragedy that Mogami went through when he was alive comes to light. Meanwhile, Reigen and the others were waiting for Mob to regain consciousness back at the Asagiri mansion. Dimple attempts to save Mob by infiltrating Minori’s body. 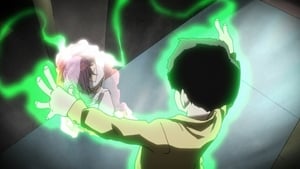