The ailing Newspaper Club wants to obtain an interview with the popular Host Club in order to save it from being disbanded due to the lack of public interest. Or so it seems. The newspaper club tell lies in their papers, so the club leader wants to interview the host club because he thinks that Tamaki is using his parents’ power to control the popular students, and wants to tell the whole school that. Apparently he thinks of Tamaki as his mortal enemy. 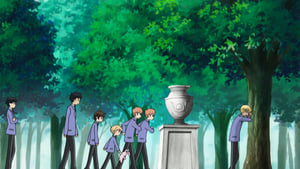