Hikaru gets jealous of Haruhi’s former classmate while at the pension. Kaoru pretends to be sick for the date, and instead sets up a date for Hikaru and Haruhi to try to get Hikaru to think of other people which Tamaki does not take too well. During their date, Hikaru runs off somewhere, and a thunderstorm occurs. Worried about Haruhi, Tamaki calls Hikaru, and tells him that Haruhi is afraid of thunder, letting everyone know Haruhi’s weakness. In the end, Hikaru apologizes to Haruhi, who is hiding under a table in a church, during the thunderstorm and comforts her while she is crying. He apologizes for the way he acted, but Haruhi thinks he is Kaoru. 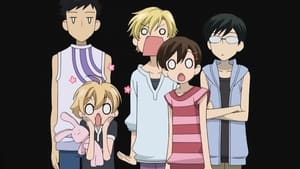