The Sun, Ocean and Host Club

The Host Club visits the “real beach” in Okinawa upon Haruhi’s request, but, Kyoya having invited customers, Haruhi is still unable to wear a swimsuit – much to the others disappointment. The twins devise a game to see who can find out what Haruhi is afraid of first, drawing Tamaki in with the explanation that only close friends show each other their weaknesses. Kyoya hypes up the competition by offering up photos of Haruhi in middle school. One accident occurred that caused a fight between the Host Club members. Kyouya, however, made Haruhi realize what her mistakes were and she eventually apologized for her wrongdoings. Tamaki wins secretly in the end, during a thunderstorm. However, the rest of the host club walks in at the most inopportune moment, as he covers her ears and places a blindfold on her to “block the thunder.” The group ends up leaving with Tamaki chasing after them, trying in vain to convince them that he’s not a pervert. 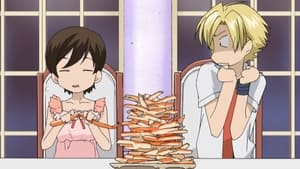