With a drone delivering him a Dominator, Kogami manages to outwit Senguji and kill him, although he also takes some shots in the process. Just then, Yuki is captured by Makishima, with Kogami too weak to follow. As Masaoka tends to Kogami’s injuries, Tsunemori goes alone to pursue Makishima. To her shock, she discovers her Dominator is useless against him as his Crime Coefficent levels are too low, with Makishima attributing his murderous intent to his own free will. He gives Tsunemori the opportunity to try killing him with Senguji’s shotgun, but she finds herself unable to do it and is forced to helplessly watch Makishima kill Yuki right before her eyes. 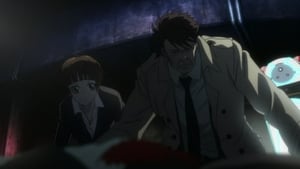