Taking place three years prior to the series, the episode focuses on Yayoi, who was a guitarist in a band before being imprisoned in a rehabilitation facility for being a latent criminal. As she anxiously waits for release so she can play the guitar again, she is approached by Kogami, who was still a detective, and Ginoza about a series of crimes occuring in the area she was once familiar with. She initially rejects their offer until Kogami gives her some guitar strings which reminded her of a guitarist she admired, Rina Takizaki. When the club they are investigating gets set on fire after Kogami’s partner Mitsuru Sasayama jumps the gun in approaching culprits dealing with molotov cocktails, Yayoi decides to search for Rina, only to discover she is part of a resistance group selling the molotov cocktails in the hopes of overthrowing the Sybil system. 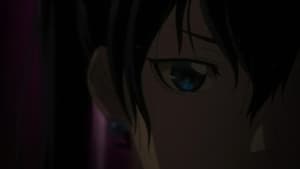