A man in a helmet breaks into a pharmacy, kills the staff, and departs with drugs. When the MWSPB arrives on the scene, they find his coefficient wasn’t high enough to raise an alarm. The same man attacks a woman in public, brutally beating her to death with a hammer in front of a crowd and a Psycho-Pass scanner. Later, the team learn that more culprits, wearing the same helmets, rob an armored car. Kogami deduces that the second crime would have a motive, leading their investigation to a man named Jyunmei Itoh who had a grudge against the victim. As Itoh attempts to escape, Kogami deduces that helmets copy the clear Psycho-pass rate of innocent bystanders and thus help criminals avoid evasion. With Akane and Masaoka’s help, he apprehends the murderer. 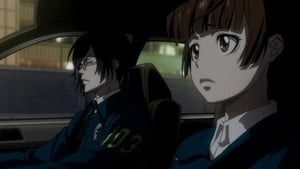