As Makishima works on reprogramming the virus, both Kogami and the MWPSB arrive at the factory, with Kogami instructing Akane that they need to shut down power to the facility to bypass the security. Prior to arriving, Akane manages to convince the Sibyl System to keep her Dominator on Paralyzer mode with the safety unlocked regardless of Crime Coefficient to use as a trump card against Makishima and Kogami. After the power is shut down, Kogami sneaks into the facility whilst Akane and Yayoi head to the control room in case Makishima attempts to activate the emergency power. Finding the control room empty, Akane comes to realise that Ginoza and Masaoka are in danger. As Ginoza becomes trapped under a container after tripping up a trap, Masaoka comes face to face with Makishima. Although Masaoka appears to get the upper hand, Makishima threatens to blow Ginoza up with a stick of dynamite, with Masaoka ultimately sacrificing himself to save his son. 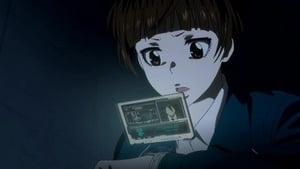