Lawrence and Holo continue their escape through the sewers. When Holo hears noises in front of them, the two try to backtrack, but run into more men. After eluding them, Lawrence is attacked by two other men. Although he manages to defeat them, he is stabbed during the fight. After arriving at a dead end, Chloe shows herself to Lawrence and when Lawrence refuses to hand over Holo, she orders for him to be killed. Fortunately for Lawrence, Holo refuses to let that happen. 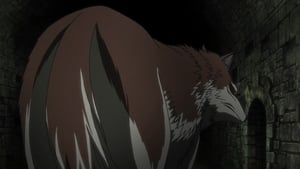